Aluminum recycling is closely intermingled with the setting up of the aluminum industry in the country. In the 1920s, when the earliest records of producing aluminum utensils in the country began to appear, the segment used scrap imported from various countries as raw material. In the 1990s, with the start of can production in Brazil, metal recycling intensified, and volumes are ever greater.

Nowadays, aluminum recycling in Brazil is highly effective, with levels that are much higher than the world average, and virtually all scrap available is recycled. In 2015, Brazil recycled 602,000 tons of aluminum. The relationship between this volume and the domestic consumption of aluminum indicates a percentage of 38,5%, which exceeds the world average of 27,1% (2014 basis). Of this total, 292,500 tons refer to scrap from aluminum beverage cans that correspond to 97,9% of the total packaging consumed in 2015, a figure that has placed Brazil in the best positions of world since 2001.

We expect steady growth for this activity, since more and more products are being made with aluminum. This is an irreversible tendency in the packaging business, while the increased consumption of the metal in the automotive industry is another important lever for developing aluminum recycling. 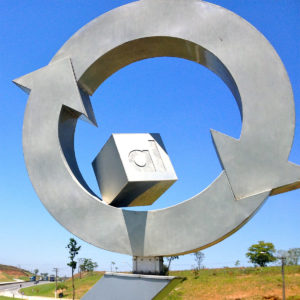 Pindamonhanga, a city located in the countryside of SĂŁo Paulo, is the national capital for aluminum recycling. ABAL granted the city this award in 2003, in recognition of its remarkable role on behalf of the activity. On the occasion, an aluminum-made sculpture was presented to the city, representing the international aluminum recycling symbol. The work by sculptor Hans Goldammer, who was born in Santa Catarina state but who lives in SĂŁo Paulo, is 4.5 meters tall, was made from aluminum plate, and is installed at the entrance to the city, alongside the Dutra Highway (linking SĂŁo Paulo and Rio de Janeiro ).

Today, recycling companies headquartered in Pindamonhangaba have the capacity to process nearly 70% of all scrap recovered in Brazil. The choice of companies was due, among other factors, to the prime location of the city, nestled between the two largest cities in Brazil, SĂŁo Paulo and Rio de Janeiro, and to the infrastructure offered by the municipality, which has invested heavily in industrial expansion.

The story of aluminum recycling in Pindamonhangaba began in the 1970s, when Alcan (now Novelis) installed its plant in that city to produce beverage can sheets. In 1994, the company started using recycled aluminum in its plate production, which led to the emergence of the recycling center. In 1996, Latasa arrived there with its own recycling center. In 1997, Recipar (Latasa) arrived in the municipality and, in 1998, Alcan (now Novelis) installed its own recycling center there. Currently, the Pindamonhangaba center has two companies: Latasa and Novelis Reciclagem, which in 2010 acquired the assets of Aleris Reciclagem.