NEWS
Tweet
← back to News Library
2015-09-11
Aluminum cans recycling hits new record and Brazil remains as the world leader
The country recycled 98.4% of packaging consumed in 2014 and has been the world leader since 2001

The Brazilian Aluminum Association (ABAL) and the Brazilian Association of Highly Recyclable Cans Manufacturers (ABRALATAS) report that in 2014 the country recycled 289,500 tons of aluminum beverage cans out of the 294,200 tons available in the market, a growth of 12.5% over the previous year. Thus, the recycling rate for aluminum beverage cans reached 98.4%, keeping Brazil as the world leader since 2001. According to data of the two entities, 22.9 billion of packs were recycled last year, which corresponds to 62.7 million / day or 2.6 million/hour.
According to ABAL’s Recycling Market Committee coordinator, Mario Fernandez, the recycling industry in Brazil has grown and matured. “For over ten years we have been the country with the highest rate of aluminum cans recycling worldwide, sustaining a performance of over 90%. This demonstrates both the maturity level and the structure for the Brazilian recycling market. This is an increasingly outstanding market for the industry, the society and the environment. ”
For Renault Castro, CEO for Abralatas, “maintaining the recycling ratio close to 100% demonstrates that the model, which is a benchmark ô for drawing up ô the National Solid Waste Policy, has consolidated itself and serves as an example for a low-carbon economy, also generating jobs and income, according to the objectives to be achieved at COP-21 in Paris.”

In 2014 alone, collecting aluminum beverage cans injected R$ 845 million in countryôÇs economy, thus contributing to generating income and jobs for thousands of waste pickers. Moreover, the recycling activity consumes only 5% of electrical energy, when compared to the primary metal production process. This means that recycling 289,500 tons of cans in 2014 allowed savings of 4,250 GWh/year for the country, a figure that corresponds to the annual residential consumption of 6.6 million people in two million homes. 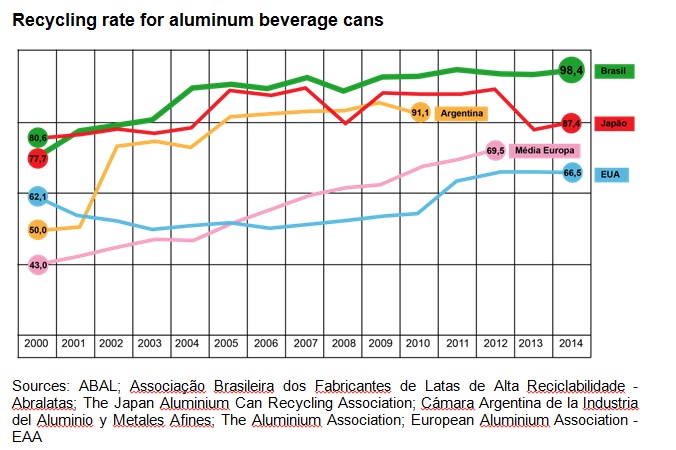 An analysis on the beverage aluminum can lifecycle in Brazil, an unpublished study by the Packaging Technology Center (CETEA), has confirmed the advantages of this packaging for the environment. According to that survey, recycling aluminum cans for obtaining a new package reduces C02 emissions by 70% and energy consumption by71%, among other benefits, when compared to cans made only with primary aluminum.
The table below shows how increasing recycled material has improved the parameters for relevant environmental variables:

Reducing environmental impacts versus a scenario without recycling